NOTE - Before doing any projects, I highly recommend that you first go through the “Critical Upgrades” list and verify that your boat has all of the applicable items addressed. There is a link on the Message Board (copied here) entitled “CRITICAL UPGRADES – DO THESE OR ELSE!!!” that will take you to them. It is a good way to both learn your boat and make sure it is safe. Don’t put it off.

I am refitting my 1987 MK 1 Catalina 34, hull #493 for future short and extended cruising. In the slip I use a ProNautics 1240P AC charger to charge my house bank and reserve battery. To have as many anchoring and mooring options as possible, I need a way to charge the batteries while underway, at anchor, or on a mooring for multiple days. To do that, I elected to install solar panels. Before doing this project, I added a bimini over the cockpit with a removable connector between the new bimini and the existing dodger. This project is about mounting the solar panels onto the bimini, and connecting them to my existing electrical system only.

The solar charging system will tie in nicely with the complete electrical upgrade I completed in the 1st Qtr of 2016. Details for that are in a separate write-up entitled 1987 MK 1 Catalina 34 Electrical System Upgrade that I added to both the “Electrical” section and the “Projects by Boat/Author” section of the Tech WIKI.

As a final note, every boat is different. The routing, methods, solar equipment, and decisions I made may not work on your boat or for your needs. I am not an expert on this subject. This is only a summary of what I did, not a manual of what you must/should do. This is one way, not the only way. Good luck and I hope you find this write up helpful.

Some Questions For Choosing Solar Panels

Like most topics related to a boat, when it comes to solar panels and their installation, there isn’t a simple choice. There is a lot to read on this subject, and lots of opinions (often conflicting) to sift through. I started with the basics, so some of the questions I needed to answer were: • Identify my typical amperage usage in a 24 hour period. • Choose between flexible or rigid panels. • How much solar to install. • Choose between a parallel, series, or each panel run separately type of system. • Choose between MPPT charge controller manufacturers. • Should multiple panels be controlled with one controller, or each panel with its’ own charge controller.

Previously I changed all but two light fixtures inside the boat to LED. I changed my navigation, anchor, and spreader lights to LED. My radar, chart plotter, auto pilot, and electronics are low amperage devices. My biggest amperage draw is my refrigerator at ~ 5.5 amps when running. It’s an intermittent load, so really only draws ~1 amp/hour. I added ~30% margin to my total monitored energy usage, and felt it reasonable to use 80 amps per day for sizing the Solar Panels.

I chose to use flexible Solar Panels due to weight (6 lbs vs 22 lbs), and the ability to mount it to the bimini without a separate SST frame. Directly mounting to the bimini will reduce the surface area for the wind load to affect. Flexible panels do cost a little more, and are not as efficient. I felt with the margin I added, the reduced weight, reduced surface area for wind loading, and waiting to buy them on sale that flexible solar panels were the better choice for me.

For determining how much solar to install it’s important to know the charging period available in the areas I’ll be sailing in. I’ve read that 5.5 hours per day is a good guide. Using my daily 80 amps energy usage x 12V = 960W; 960W/5.5hrs = 174.55W. In theory a single 175W solar panel, would be the bare minimum. Since nothing works perfectly, I chose to go with two 175W flexible solar panels. I know I have margin in the energy usage, and now margin in the panel sizing, but I’m not an expert, I have the room on the bimini, and more is better.

I considered running the panels in series, but didn’t like the risk of a single point of failure shutting down my solar charging capability. As a result I chose to run the solar panels separately, each with its’ own MPPT charge controller. I ruled out a parallel system due to shading risks.

To control the solar panel output, I chose Victron Energy 75/15 MPPT charge controllers. They have a good reputation for quality, durability, ease of installation, available features such as data available via Bluetooth, and are good at getting the most amperage out of your solar panels and into the batteries.

To maximize each panels capabilities, I chose to run each panel separately and control each with its’ own MPPT charge controller. It’s more expensive, but this way provides me redundancy to compensate for any potential shading issues, and in case one panel fails for some reason. I decided on solar panels from Renogy. The reviews were very good, and the test results from various individuals matched the specification sheets. I installed two Renogy RNG-175DB-H 175W flexible solar panels. Photo (1) shows the factory data plate for the solar panel. 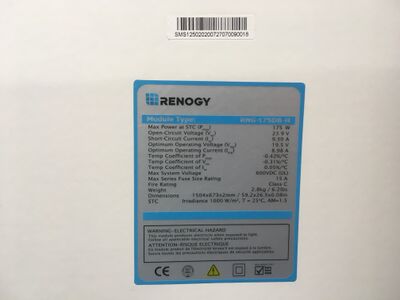 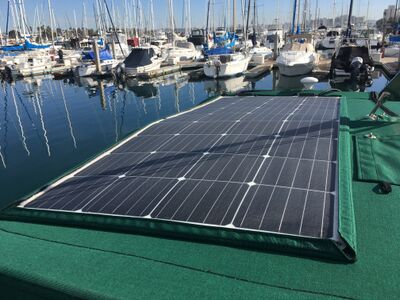 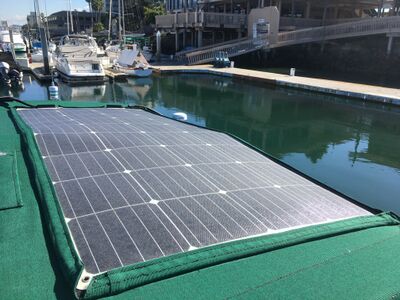 Photo (4) shows an overview of the port and starboard solar panels installed. 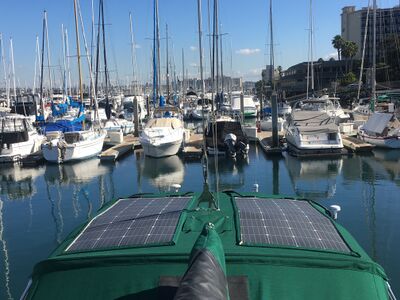 The solar panel wires are 10AWG, and connect to the solar panels with MC4 connectors. They then travel down to the port cockpit coaming where they transition into the boat through an existing hole in the coaming. The existing hole was where the old auto pilot control head used to mount. Mounted over the hole is the Cockpit Transition Box. It is an exterior grade waterproof box that is thru bolted and sealed with Bed-It Butyl tape between the box and the coaming. The box has a hole in the back to match the hole in the cockpit coaming, as well as 6 counter bored holes in 2 rows along one side, and a larger oblong hole in the top surface. Six PG7 waterproof cable glands are installed in the holes along the side, and a SEAVIEW Grey ABS Plastic Cable Gland - UV Stable - Multi Cable (up to 2-17mm each) is mounted on the top of the box. Two pairs of 10AWG wires from the solar panels, and one pair of 10AWG wires for a separate Cockpit Power Box mounted on the bimini pass through the PG7 cable glands. My two AIS antennas and one external GPS for my chart plotter pass through the Seaview multi cable gland.

Photo (5) shows the two AIS antennas and the one external GPS for my chart plotter passing thru the Seaview multi cable gland, and thru the hole in the box and coaming into the interior of the boat where they enter a single ¾” split loom. 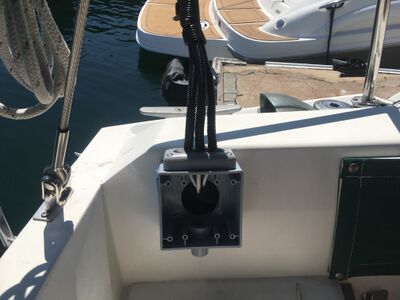 Photo (6) shows the 10AWG wires from the solar panels and the 10AWG wires to the Cockpit Power Box transitioning thru the PG7 waterproof glands on the side of the junction box, and then thru the hole in the back of the box and thru the cockpit coaming into the interior of the boat.

NOTE –The Cockpit Power Box and associated wires I reference are not covered in this write up. I referenced them to avoid confusion since the solar panels require only 4 wires, but the photo of the Cockpit Transition Box shows 6 wires. 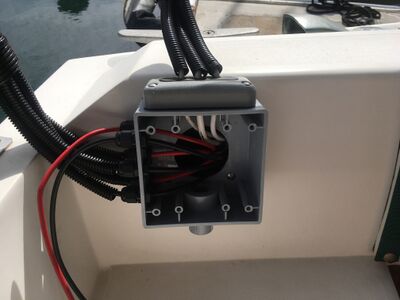 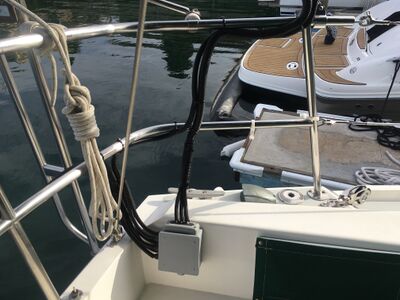 Photo (8) shows the inside of the cockpit coaming and the drip loop in the wires. They are secured with a cable tie wrap to a wood block I epoxied to the inside of the cockpit coaming. At the top of the photo, you see the end of a ¾” split loom. The AIS and external GPS coax cables run inside this split loom to provide them some separation from potential electrical interference as they run past the various electrical wires on the way to the Navigation Station. 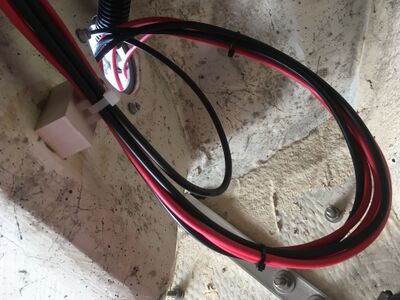 The 10AWG solar panel wires continue along the inside surface of the coaming to another tie wrap. The positive wires from the solar panels enter and exit a Solar Panel Disconnect Box thru PG7 waterproof glands. The negative wires from the solar panels bypass the box and continue on to the charge controllers. The Solar Panel Disconnect Box is an exterior grade waterproof box. The box is mounted to a piece of wood epoxied to the vertical bulkhead of the aft lazarette next to the manual bilge pump. Photo (9) shows the positive wires as they are being installed. 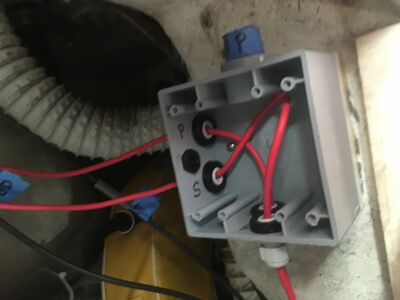 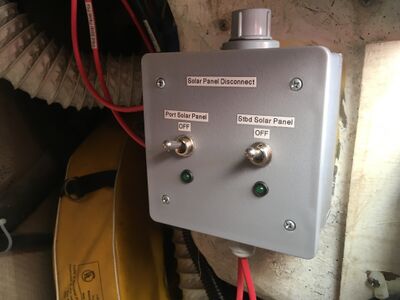 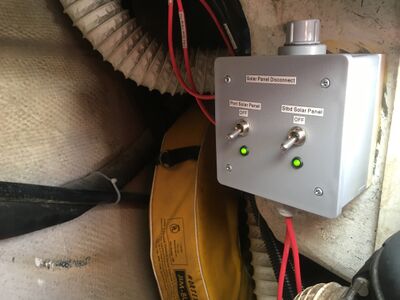 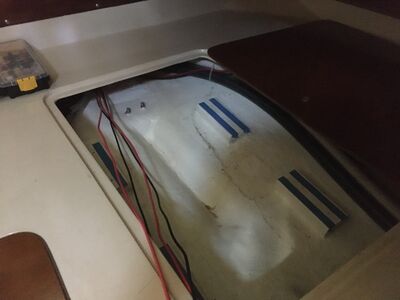 Photo (13) shows how the two split looms, one containing wires and one containing the propane hose, run and are secured along the inside top surface of the seat locker in the aft cabin. 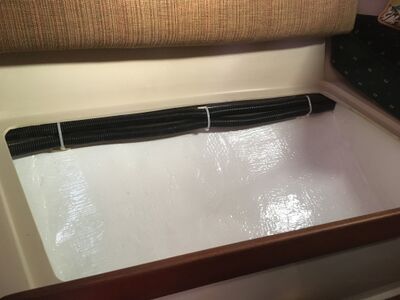 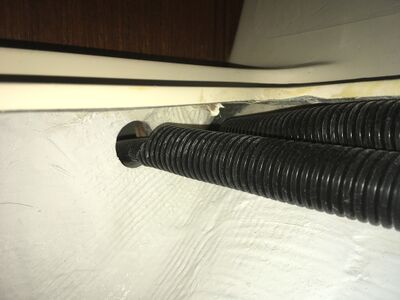 Monitoring battery temperature and voltage is important for proper and safe charging. I’ve done this with the Bluetooth enabled Smart Battery Sense Temperature/Voltage Sensor from Victron Energy. The small blue square in Photo (17) is the Smart Battery Sense Temperature/Voltage Sensor connected to the House Bank and mounted to a battery in the battery compartment. 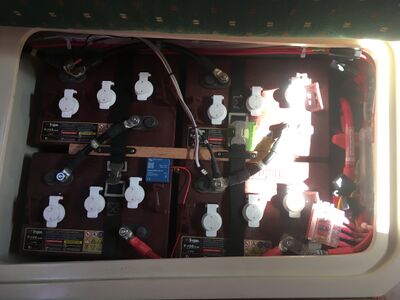 Photo (18) shows a screen shot of the Smart Battery Sense Temperature/Voltage Sensor display on my phone at initial start up. 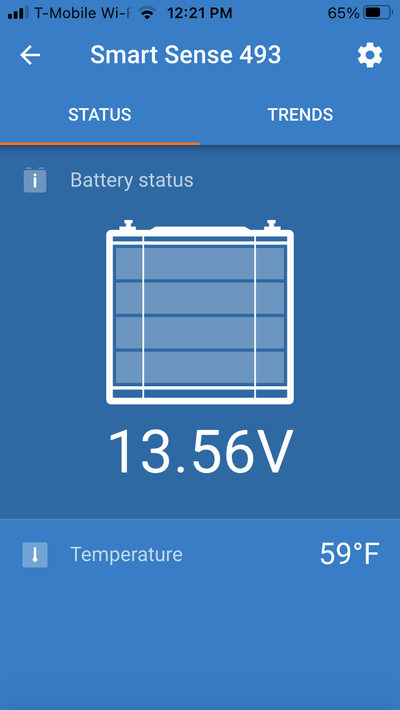 Photos (19) and (20) show screen shots from my phone at the initial start up of the Port and the Starboard MPPT charge controller displays. The system is putting 7.8A from the Port panel plus 7.2A from the Starboard panel for a total of 15A into the battery bank. 5 1/2 hours at that level and my 24 hour amperage usage is covered. The screen shots were taken when my batteries were close to fully charged, moderate sun with some clouds. 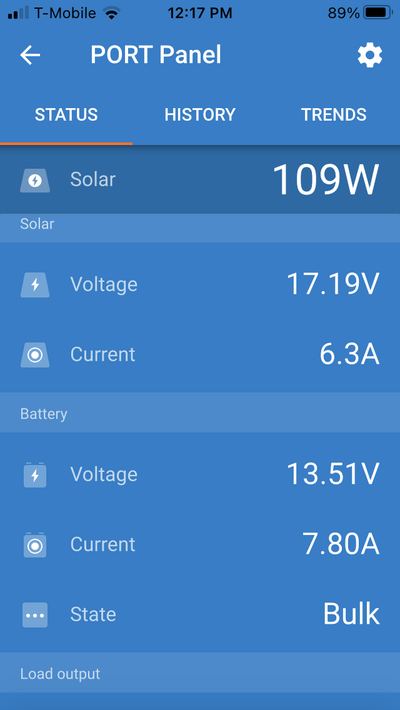 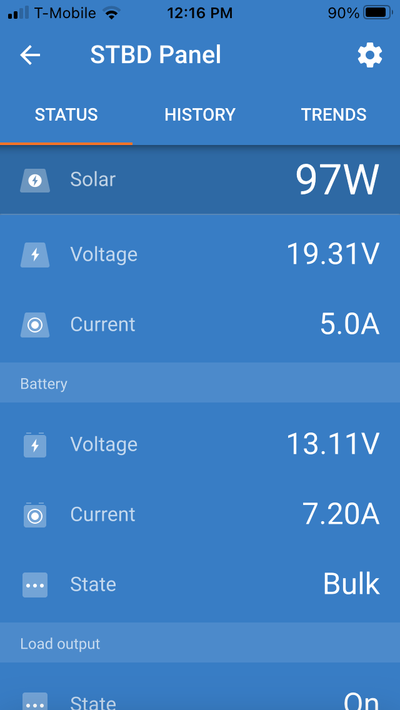 With the project completed, Photos (21) and (22) show what the bimini and connector with both solar panels installed looks like from different angles. The two 175W solar panels are almost invisible. 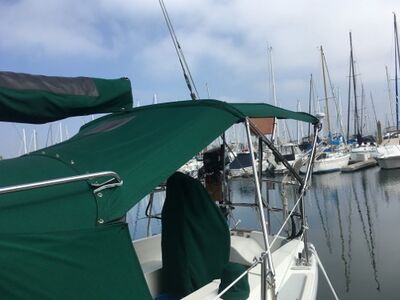 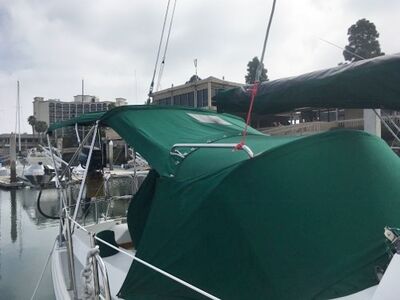 Reference PDF’s For This Project

For reference, I've attached a copy of the parts I used for this project in PDF format. All links have been removed from the PDF.

For reference, I've attached a copy of the electrical schematic of the system in PDF format.

For reference, I've attached a copy of this complete write-up in a PDF format. All links have been removed from the PDF.