(The frame is 1 inch stainless, 3 bows, with struts both fore and aft to provide the necessary support for the panels.) 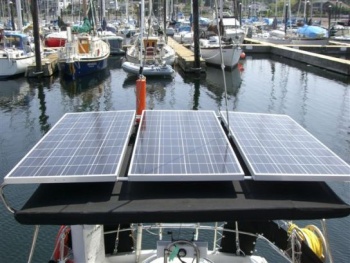 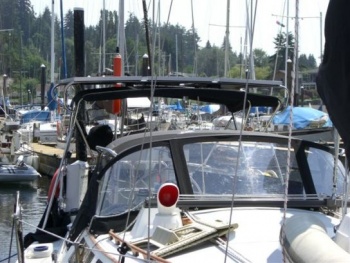 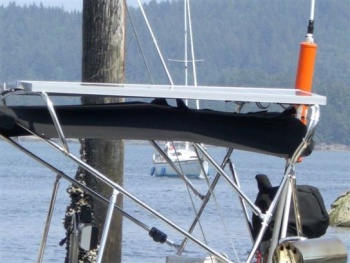 The bimini is now complete. 390 Watts of solar. By 8:00 in the morning it was serving the fridge load and putting 2A extra into the housebank. By noon it had completely replenished the 56 Ah deficit. I'm thinking I might run electric heaters through my inverter just because I can. It is really not as bulky as I thought it might be...

And the part I really like is that it has a load shedding feature. There's a 20A circuit that shuts off if the battery drops below a threshold voltage and starts up when it's above another threshold. So it's possible to connect load like refrigeration to the load controlled circuit (this serves the load from the battery - it's independent of the panels - would work even if plugged into shore power.)

So we could leave refridgeration on and go exploring inland. In the worst case scenario, we come back to some smelly food but we won't have killed the house bank.

Q) Was the overall electrical design your own, or was it supplied by the manufacturer of the panels?
A) The panel manufacturers really only supplied the specifications. If you do some reading, you will likely be drawn to MPPT charge controllers. Outback and Bluesky are a couple of names that seem well regarded. I used a BlueSky 3024i. Believe it or not, connections to the controller and the settings for the controller are identical for 12V and 24V batteries and series or parallel installation. It really doesn't matter what you connect to it, the controller will figure it out. It is not a complex design. The biggest issue was sizing the system and I followed the same philosophy as my anchor design. You can't have too many electrons. I assumed doubling my current cruising load (tropics for the fridge, fans, watermaker) and did the math which crudely was as follows:

390 Watts met the asthetic criteria. The fudge factor allows for inefficiency (I am not going to adjust panels to face the sun and clean them every day) & extra load (because you never know). I don't have much data yet, but I think this was a very conservative design. No Honda generator will be in my aft locker.

Q) How did you fabricate the connections to the bimini frame?
A) I have two bars that support the panels mounted on a standard bimini frame. The bars bend around and have a nut welded in the end. Bolts pass throught the bimini frame and into the bars. The design allows for the bars to rotate forward or back so that I can make adjustments on the bimini and still level out the panel array. The panels themselves mount to the bars with straps bolted to the panel frame. I have neoprene pads so nothing rattles. The bar ends are nicely finished and have fittings that mate to the round surface of the bimini tubing.

Q) How easy would it be to remove the panels for maintenance/winter decommissioning?
A) 12 nuts. 3 electrical connections. Maybe 18 minutes.

Q) By having them in series, does this mean that if one panel fails the whole system is offline?
A) Yes! But don't let that dominate your decision criteria. Parallel installations are much more vulnerable to shading. A mast shadow across a panel could drop the voltage for entire installation below your charge threshold and give you zero output. That could happen daily. The likelihood of my system going down with a panel with a 20 year guarantee is small. If it did happen, I would have ten minutes of wiring work to do bypass the bad panel. (Following the 2 hours of diagnostic work to figure out what the problem was.) I wouldn't even consider wiring the panels in parallel.

Q) Did you reinforce the standard bimini frame in any way?
A) Yes. It's 1 inch tubing (common anyway). There are no straps. I have struts aft which lock it up both fore and aft and side to side. I have struts forward for extra support. There is some movement side to side at the forward part of the bimini if I push it. It may wobble on it's own in winds at 30 knots plus (didn't budge in 20 the other day). I will fabricate some blocks that will go around the backstay bridle and lock it up entirely.

Q) Any concern about the additional loads on the bimini frame when heeled in a blow?
(A couple of us in the club have discussed installing panels in this location, but assumed we would need some kind of reinforced arch.)
A) Yes. I used standard bimini type hardware and it still has set screws in the fittings. I don't like set screws in end fittings and plan to drill and through bolt before going down the coast. Once that is done, I will not be worried in anything up to 40 knots. And once it gets to 40 knots I'm going to have a whole bunch of other things on my mind other than my bimini, like how to gain leeway because every damn port down the coast has some unsafe bar in a breeze...

One thing that is annoying is the 400 different opinions that you run into and the mythology that you have sort out before you do a system like this. You'll bump into somebody at a boat show who will tell you that the sweet spot for solar is 80 Watt panels. Best bang for the buck etc. And they were, three years ago. You would kind of just like to know what to get and where is the cheapest place to get it that has good service and not spend a month researching and sorting it out. So here's the skinny:

Kyocera panels - 130W x 3 - buy them here: http://store.solar-electric.com/ they have inexpensive shipping options $538 ea
BlueSky 3024i controller- $345
Add a circuit breaker, some cable and shipping for $200
Have your favorite boat guy fabricate some bars and add some struts with standard end fittings (for this you may have to sew a bosun's chair and redo the cushions in your rigger's boat - cash is also a viable means of payment in many jurisdictions).
Make your own mounting straps out of stainless steel - I used the solid part of hose clamps.

Warning: I think this will yield a great kit that fits well in a C34 for typical+ electrical loads. But... I moved the split in my backstay up to accommodate a perfect fit on my panels. I don't know how wide the split is on a MKII. Might be perfect or a little wide. Cut some pieces of cardboard and throw them on your bimini to test the fit before you order. You won't fit a panel between the split on the backstay of a MKI. But you're really tired of bumping your head any way, so add a riggers bill to your total and get it done!

This article comes from this message board post: http://c34.org/bbs/index.php/topic,4969.0.html