The major advantage of double line reefing is that you have the ability to individually tension the tack and the clew when reefed. We have found that the clew requires more tension on the reefing line, primarily because the angle of the clew reefing line is at 45 degrees from the cringle, while the tack reefing line is perpendicular to its cringle. The angled line needs more tension to achieve the same strength. Single line reefing systems, while popular and very useful, inherently can’t maintain different tensions on the clew and tack at the same time.

We inherited our setup when we purchased “Aquavite” from her only owner in 1998. I had never experienced a system like this before, and I spent some time tracing the lines and understanding how it worked, before we first went out in conditions that required its use. That doesn’t mean I was able to work it first time out, but at least we figured out where the apparent spaghetti was supposed to be after I messed up and then got the operation down to a science. You can do it, too. The descriptions are for double reef points, but are just as applicable to single reefs.

The end boom fittings are the easiest, and require only the same hardware as any other reefing gear. We have a single long track on the starboard side, with two adjustable blocks. Our boom has the reefing lines run inside the boom through slots cut into the boom at the aft end and forward near the gooseneck, although it would be just as easy to run the lines outside the boom through eye straps, although I’d choose separate sides to do this to run forward outside the boom. If the lines are run outside the boom, blocks could be put on the boom to turn the clew lines down to the base of the mast.

The forward boom / gooseneck / deck fittings are the most complicated. We have two level deck organizers with five blocks on each side. On the port side: the first reef clew, second reef clew and second reef tack (plus the cunningham and vang). On the starboard side: first reef tack (plus main halyard, lazy jacks, and mainsheet - one block empty). 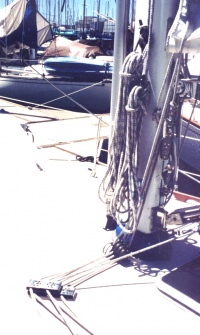 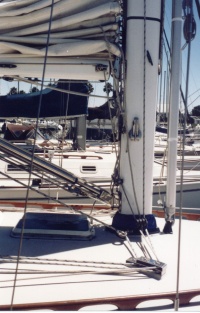 The clew reefing lines are brought from the boom to a double block fastened to the mast just below the gooseneck and turned down, through another multiple part block at the base of the mast to the deck organizers, and then led aft to the cockpit. The tack lines are easier: one end of each tack line is tied through the center of a cleat on each side of the mast, run up through the reefing cringle, down to the base of the mast through the same multiple part block that the clew lines lead through, and then to the deck organizers and back aft.

In use, the system is actually simpler than a single line reef, although it may at first appear to be harder. To reef, going upwind, for instance, keep sailing on the jib. Drop the traveler, and, only if necessary, sheet out the mainsheet to luff the main. Release the halyard (to a pre-marked point), while pulling in on the tack line and then the clew line. The tack reefing line should come in easily, occasionally the clew reefing line will require final adjustment with the cabin top winch, one of the reasons why it’s there.

Each reefing line is also pre-marked with black bands. No gooseneck hooks are needed, since the tack line runs up from the mast cleat and through the cringle. No need to ever go forward, except to tie the reefing lines on the sail around the the boom.

The pictures show each portion of the arrangement.

Many people use sheet bags and extra hardware to control lines in their cockpit. We don’t need any and just coil the lines. The starboard side cockpit picture at the aft end of the coach shows how we coil our lines without the use of any extra snaps, hooks, velcro, bags or bungee cords. Simple: coil the line, reach inside the top of the loop to the connected end of the line, grab it and pull through the loop and twist it once over the top of the loop, tug to tighten, and drop. It’s just like flaking lines, is all it takes, with no extra hardware, and they hang on their own weight. The coiled lines shown are: mainsheet (hooked over the cleat), starboard traveler control line and lazy jack line. 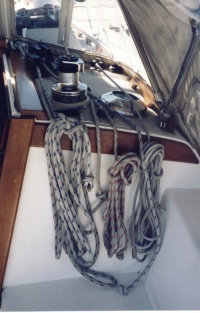 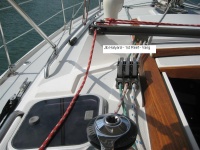 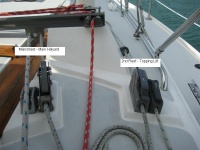 Article in progress. Feel free to add your comments. 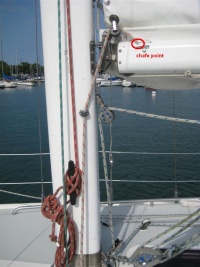 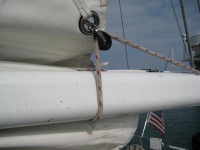