Interestingly, I had already started my own electrical upgrade plans (and even purchased a few components) when John Gardner and Jim Moe submitted their own electrical system upgrade projects. This gave me an opportunity to sanity check and fine tune my plans, and even borrow any better ideas they implemented.

First and immediate, replace that old alternator bracket. Much has been written in both the Project pages and the Message Board about this. I won't bore you with repeated details here. Let's just say I felt relieved that it was done.

The -H version of the regulator means that Balmar provided a prefabricated wiring harness. Overall, this is a good thing, with only 2 minor drawbacks. The harness length is fixed (about 3 feet long). And the stator and field connections were attached to a molded plug connector that didn't match the 7 series alternators -- emailed Balmar and they said "Just cut the connector off and attach the correct ring lugs. Your warranty is still valid even though you do this modification." (I gave Balmar another "plus" for that.)

I also installed a Balmar Digital Duo Charge to provide smart charging of the engine starter battery. It was more expensive that other options, but gives me the luxury of mixing battery types for the house bank and starter battery. It too has smarts built in so the battery gets topped off efficiently. It will operate whenever the input side is at or above 13VDC; so it works fine when the shore charger is plugged in. And because it has a simpler, but still useful display that I wanted to be able to see, I mounted it side-by-side with the regulator.

The wiring changes also required some re-arranging of stuff in the battery box. Here's some before and after pictures.

The final result is what you see in the schematic below.

I also created a spreadsheet with more details to keep track of the wiring.

By the way, I didn't take on all this work just because it was fun, or because I needed more to do. It all really started because I'm adding an electric anchor windlass that could truly drain my house bank. Upgrading the alternator and wiring would insure I could provide enough power for the windlass. But that's another project (wink) 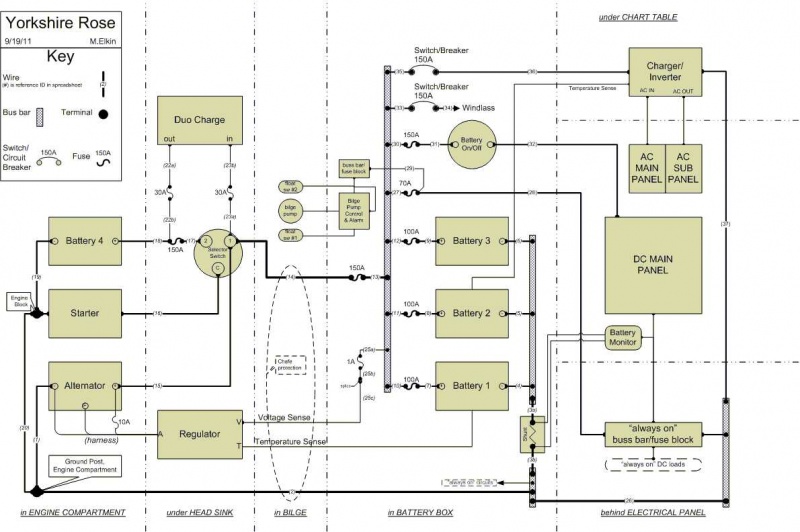