The plans and instructions given here will allow most C-34 Mk I owners with access to a modest wood shop to make their own cockpit sole inserts. The cockpit sole we built is shown in Fig. A.

The stern, starboard and port sections of the standard transom version have "notches" over the scuppers (drain) holes in the cockpit. In addition, a large notch is present in the back edge of the stern section to accommodate the "emergency tiller housing" in the transom that protrudes into the cockpit (Fig. 3A & Fig. 4).

We elected to use mahogany rather than teak because of cost and our preference for the appearance of mahogany. The sole "planks" were made from 3/8" thick mahogany. Almost all of the planking was made from 1 7/8" wide pieces. The exceptions were the 2 planks used on outside of the stern section that measured 2 5/8" in width. The "stringers" (cross pieces) were made from ¾" x 1 ¾" pieces of mahogany. The lengths varied, the longest being ~26"(stern section).

The plans shown here were drawn using measurements that were made from the sections after they were assembled. While they are accurate, they should be used as a guide to make the paper and plywood "patterns" required to build the jigs for your particular boat (described below).

You will use 1/8" plywood patterns to (1) double-check that the sole sections will fit in the cockpit, and (2) to make the "jigs" required to assemble the 4 sections.

All planking was precut and their upper surfaces and edges sanded before assembling. It’s a good idea to start with the bow section since this section requires the longest planks (Fig. 2). Then, if you make an error in measuring or cutting, you can always use "shorter" planks for the stern or port / starboard sections.

Using your plywood patterns, lay your stock planking on the patterns then mark and cut the planks. Be sure to number the downside of each plank to prevent a mix up during assembly.

Use the plywood patterns to cut the stringers in the same manner as described for the planking. The number and positioning of stringers (which need not be exact) is shown in Fig. 7A-7F. NOTE – Our stringers were ¾" thick, but ½" thick stringers would work just as well.

To keep the gap between the planks equal while the stringers are being attached during assembly, 3/16" scrap-wood "spacers" are inserted between the planks. Since spacers are removed and reused as each stringer is attached, you’ll only need to make about 30.

Jigs are used to hold planks of the sole sections in place during assembly. A diagram of the jig used to assemble the Bow Section is shown in Fig. 6. This jig is made by laying your plywood "pattern" of the Bow Section on a 4’x8’ sheet of ½" plywood and then nailing 1" x ½" strips of scrap wood around the outside of the pattern to form an outline of the Bow Section insert. The pattern is removed and the planks are then inserted for assembly (described below).

All sections of the cockpit sole inserts are assembled in jigs in the same manner. Thus, only the steps used to assemble the Bow Section are described here. Bow Section Insert: 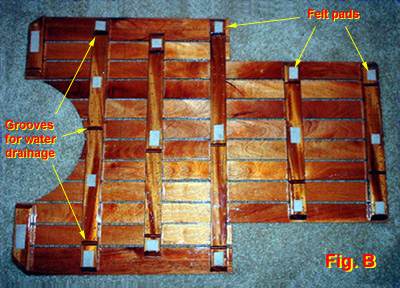