From c34.org
(Redirected from Trash)
Jump to navigation Jump to search

I used the Catalina Direct kit, got rid of the glass and made new tinted plexiglass panes and had all my aluminum frames powdercoated white. Everything is like new, the aluminum is protected, the assemblies conform to the cabinside because of the flexibility of the plex, the seals are fresh and supple. Total cost = $350. The biggest factor in my opinion is taking your time. This cannot be done well in a rush.

I wanted sufficient time to do things carefully so in preparation for the project I watched ebay for a spare set of windows. Patience paid off, a set appeared and I snapped them up. The condition of the aluminum was not quite as good as my originals but they still served my purpose. I removed mine and installed the spares. Now I had the boat closed up and all the time in the world to refurbish. A note of care here, do NOT be tempted to pry the windows from the outside. All that will do is deform the thin flange. You can cut the caulk under the flange with a putty knife or other suitable flat blade but DO NOT pry. The windows must be pushed out from the inside and very carefully.

I disassembled my windows, marked the frames with an electric engraver as to location, bagged and marked the joining plates also as to location. I cleaned up the old caulk with a knotted wire wheel in a pedestal grinder (light touch) and delivered them to the powdercoater. While he did his magic I made new tinted plexiglass panes using he old glass panes as patterns using the pattern routing technique.

With everything back on the bench I reassembled the windows with the new vinyl and caulk provided in the Catalina Direct kit. I placed a bead of caulk between the vinyl and the plex and another bead between the vinyl and the aluminum frames. The butt joints in the vinyl, both the seal and inner mullion were oriented on the top of the window where water couldn't puddle. That's one of many little things they don't tell you in the instructions. I used common Pony clamps to pull everything together to reinstall the joining plates. 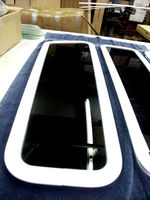 Reinstalling the windows in the boat I used all new screws but added flat washers under the heads. The washers prevent chewing up the inner frames during tightening. Every screw was driven by hand, pulling tension on the window evenly, a little tightening here, a little there. Driving them by hand allowed me more feel than a screw gun would. When it was done my arms felt like Popeye's, 92 screws.

I know there are many who like the Cruising Concepts jumbo windows and that's fine. I'm not one of them. I think they change the entire look of the boat, throw off the proportions. That, and the $1200 price tag, YIKES!!

Tools I used to make my project happen:

Powdercoating has its pluses and minuses. A particular advantage to this project is the electrostatic application of the powder. The attractive charges wick the material thoroughly into the grooves, nooks and crannies of the aluminum extrusion making for effective encapsulation of the metal.

A disadvantage may be the condition of the aluminum in the first place. If you have rot where the aluminum is eroded away (typically in the lower corners) powdercoating does not work well on filler material. Therefore the condition of your existing frames may dictate how you proceed. In over-analyzing the project beforehand there were a couple of inherent problems I wanted to resolve in addition to eliminating future leaks. One of them was the non-flexibility of the window assembly and the curvature of the cabinsides. That's been a known problem since day one. Aluminum bends so that wasn't the problem but glass doesn't. So, don't use glass, simple as that. The trade off is scratches in the plex but I'll take that any day over leaks. Problem solved.

Another issue is long term adhesion of paint to aluminum. Rather than go with a paint protocol I learned from LeFiell manufacturing decades ago (LeFiell is a local mast manufacturer among other industrial products) I chose powdercoating. That paint protocol involved acid washing, Alodine treatment, strontium chromate primer, topcoat primer and finally topcoat paint. I could easily have spent considerably more on the paint supplies than the powdercoating and ended up dissatisfied. The electrostatic application of the powder was a big factor too as mentioned in an earlier post.

About the caulking mess mentioned by others, it struck me while disassembling the windows that the manufacturer didn't use any caulking at all except at the joining plates. They were assembled dry originally and they didn't leak for decades. I figured ANY caulking in the assembly would be better. Accordingly I caulked every step of assembly but didn't go crazy with it. My caulk beads inside the grooves were continuous but not excessive. My cleanup was therefore minor. Working with a powdercoated surface and Plexiglass, the best non-damaging solvent to use is naphtha. Mineral spirits or plain paint thinner are effective second choices.

Note:
Adding to Neil's information above, here is a picture of the 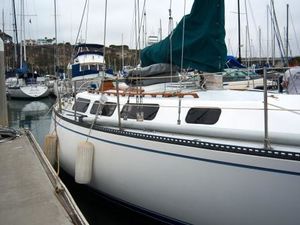 Cruising Concepts replacement windows that he mentions, and 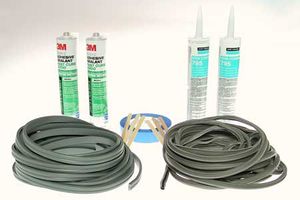