In the May 1999 issue of the "Mainsheet" I published a detailed overlay diagram of the Wing Keel Rudder Standard versus the Elliptical Rudder (look in your Tech Notes CD). In the late 90’s Gary Wiseman commented, "Why not just add a strip to the existing standard rudder and make it into an elliptical rudder?" I’d thought about his statement, but never got serious about such a modification until Phil Spicer, Hull #789 (one hull# higher than mine) put a reply on our C34 Message Board last winter writing that he had done just that. I called Phil and found he was an Industrial Arts teacher and he said it was easily added to and he was happy that had done the modification a few years ago. The project bubbled to the top of my "to do list" after I found Al Cameron’s "THIRD STAR" 1989 C34, hull #913 with an elliptical rudder parked near "APACHE" for winter storage.

I took a large piece of cardboard and taped it to the hull and rudder of "THIRD STAR" and drew an outline of the elliptical rudder. Then I moved the drawing over to my boat and redrew the outline insuring that the leading edge & top were superimposed over the first outline to get an accurate life size drawing of the extension. During my 30 years of boating, I’ve done some fiberglass work, but nothing of this magnitude. I found that one of the workers in the marina had worked in a body shop repairing Corvettes! When he agreed to walk me through the addition, it was a done deal. As I reasoned and pointed out to my First Mate, if the extension broke or fell off, we’d still have the original rudder. 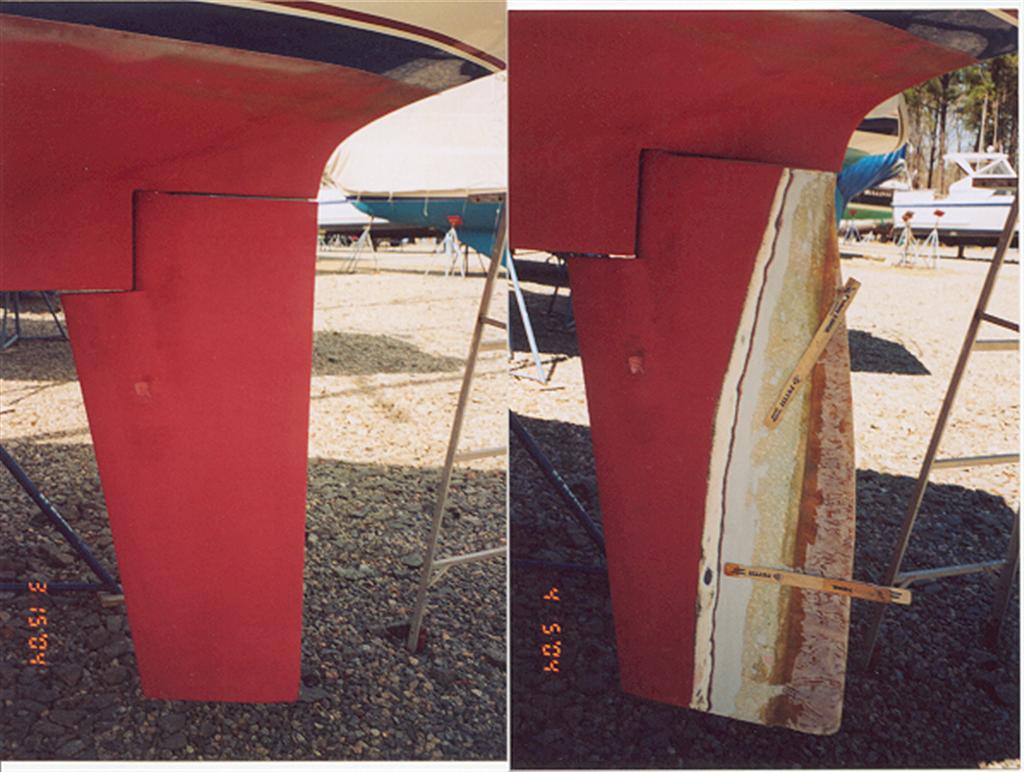 To prep the rudder I ground off the paint, barrier coat and gelcoat on each side of the rudder, about 6 to 8 inches in from the trailing edge. I cut a piece of biaxial fabric to the size of the elliptical extension and coated it with two coats of resin on each side. This was done in four steps waiting for the resin to harden between each coat. Then I took paint mixing sticks (like Phil suggested) and secured the extension piece to the rudder with screws. I added some fiberglass cloth tape and glassed the tape in between the mixing sticks. After that cured, I removed the paint sticks and added another coat of glass resin to both sides.

After the extension piece was securely glassed to the existing rudder, it then became a matter of adding additional mat, fabric and coats of glass. In all there are about 8 layers varying in width. A couple of the layers had chopped mat in resin/polyester (which I understand is called "Gorilla Hair"). With the extension firmly attached, I faired in the contour of the rudder with polyester filler (marine grade "Bondo") and then coated the porous filler with resin to seal it from water migration.

The final stages were to apply an epoxy barrier coat over the exposed area. I elected to skip the gelcoat layer as the epoxy barrier coat was just going to cover it anyway. I added a coat of hard blue bottom paint so it would match the rest of the hull and rudder. A coat of red ablative finished the job. (I touch up the ablative red on the bottom/rudder as it wears thru and I start to see the hard blue paint). 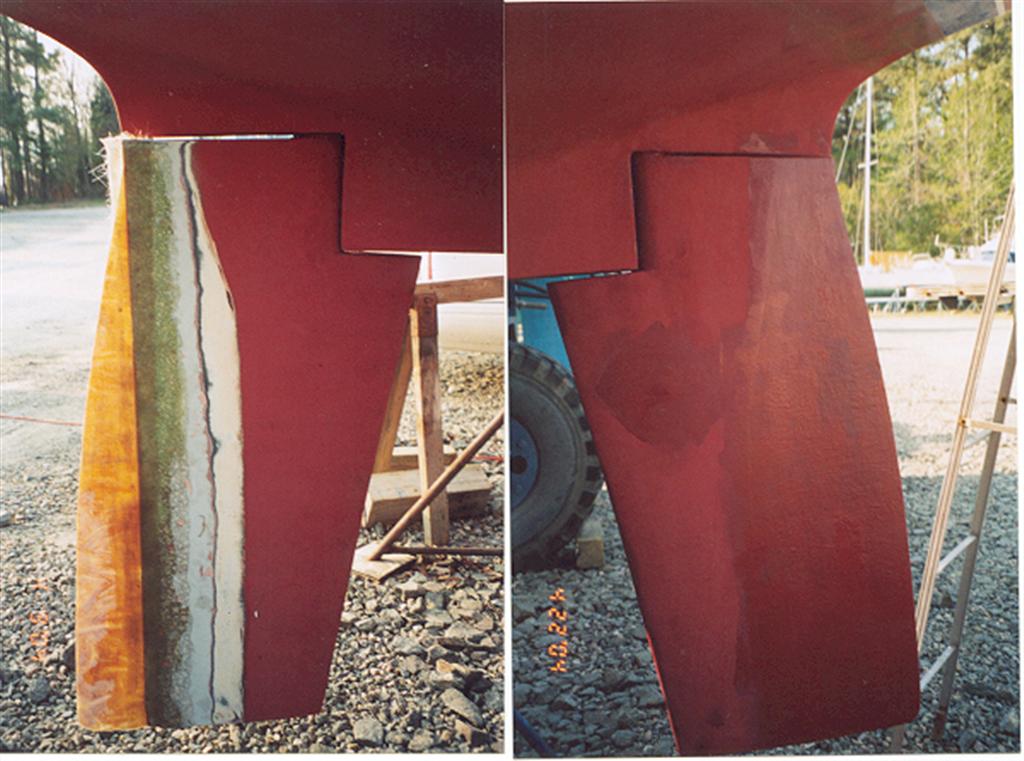 I was fortunate to be able to borrow a rotary grinder/sander that was attached to a shop vacuum. Otherwise it would have been a much messier job, as each layer needs to be roughed up and/or contoured. I used eye and breathing protection and full cover up so I wouldn’t be exposed to (itch/itch) or breathe the dust. One problem I encountered was the weather. We had a cold spring in Virginia and you should only do glass work when the temperature is 60 degrees and above.

What about the performance of my "new" elliptical (add on) rudder? With everything done I had added 5.25 inches to the trailing edge (at its widest). It’s hard to figure because of the curved asymmetrical add on, but I estimate that I added about 152 square inches of surface to the rudder. I purposely made the bottom of the added piece ½ inch shorter. If I back up and go aground, the main rudder will hit first. The round up tendency in 18+ knot winds is gone and I believe the boat backs better with the added surface area. There is a minor down side as the rudder in strong winds (18+ knots) is naturally heavier. The MKII has an advantage as they have a 40- inch wheel as compared to the 32-inch wheel of the MKI. The larger wheel compensates for that additional surface area. I don’t mean to scare anyone away from this modification, as the wheel is still manageable.

This modification was worth doing and sure beats the price of a new elliptical rudder of about $1190 + shipping (part #80458) plus the cost of removal & reinstallation. If your stainless column was not bent, you could send your old rudder to the factory and have the new elliptical rudder laid up, but the Catalina factory no longer does that.

It was a little more difficult to do the glasswork, sanding and grinding with the rudder in the vertical position still on the boat. However, just for the ease of horizontal rudder work, the amount of effort that it takes to raise the boat high enough or dig a deep hole, I don’t believe is worth all the work of having to remove and reinstall the rudder.