Replacing a Sherwood Water Pump with an Oberdorfer

Replacing a Sherwood pump with an Oberdorfer on an M25 series engine is a direct replacement. On M35 A&B engines a bit of modification is required. The C36 International Assoc was kind enough to share this article with us.

Want to save a couple hundred bucks on your next raw water pump? Avoid future problems due to the Sherwood G908 having gone out of production? Easily change impellers from the front? With the Sherwood pump price now barking at the $500 mark, the Oberdorfer N202M-16 can return half that cash wad to your beer fund. It’s all bronze. And best of all, it offers easy front-plate access to the impeller. Although suppliers won’t confirm interchangeability, C36IA Members Nile Schneider and Randy Sherwood have done the pioneering for all of us. That means less money out of our pockets and less hassle with impeller changes. Talk about a great benefit of C36IA Membership!Randy sails S/V Mutual Fun, #1057, out of Whitehall, Michigan. He is well into a major cruise, but he’s taken time to share his Oberdorfer project with us. Here’s the Sherwood (no relation) pump that all we know, as installed on the M35A engine. 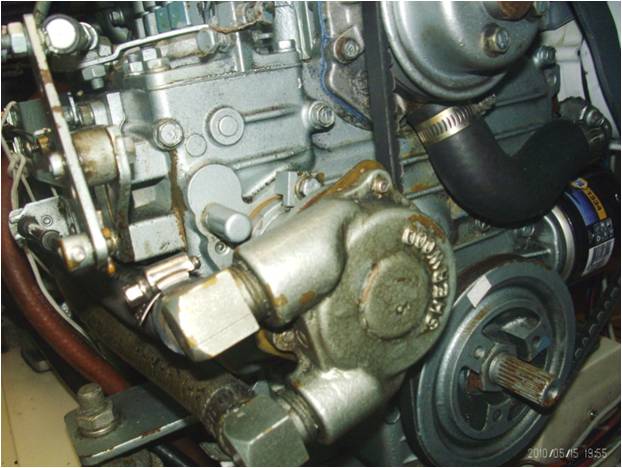 Randy used the Oberdorfer N202M-16 on the M35A engine. He discovered that here was just one small clearance issue, as shown marked on the casting in the following photo. 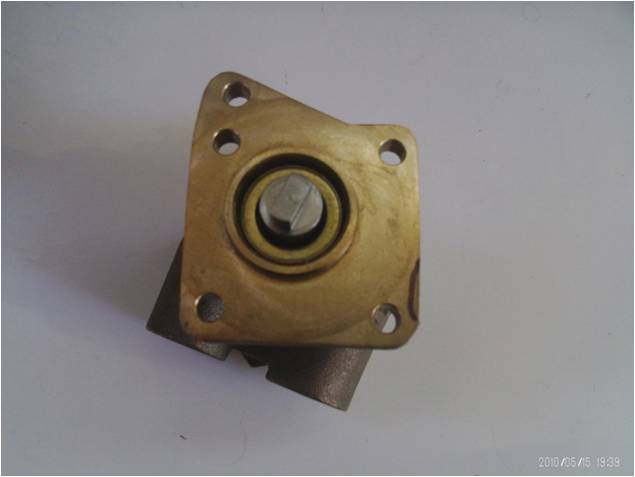 Oberdorfer Before Modification for M35A [photo 02]

He says, “It only takes a little mod to make it fit. I used my Dremel, and with about 2 minutes of work it fit just fine. The easiest mod I ever made to my boat, I think.” 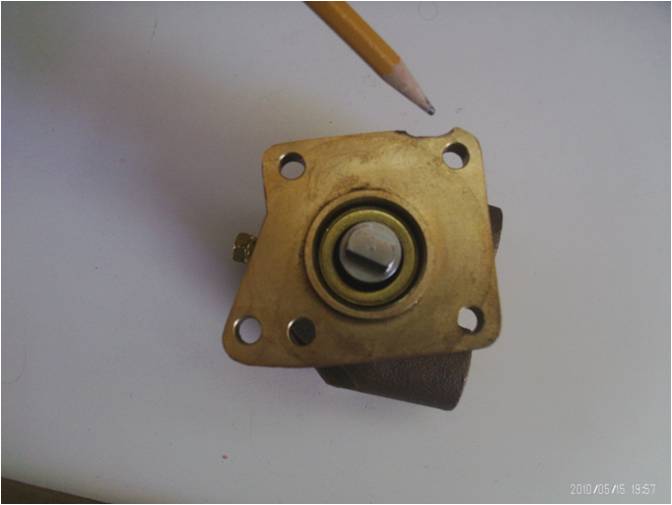 Oberdorfer After Modification for M35A [photo 03]

Here’s a photo of the Oberdorfer installed on the M35A… 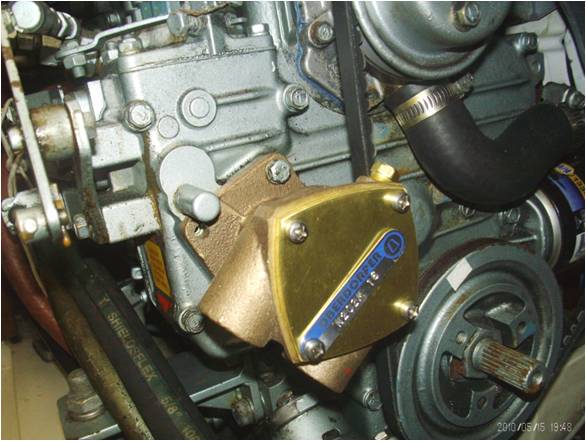 Was that quick and easy, or what? But what about the M35B? Nile Schneider sails S/V Mañana, #1798, in Lake Champlain, Vermont. He says that after owning a Catalina 30 and so easily changing impellers from the front, he sufficiently fed up with the Sherwood to come up with this great Oberdorfer solution. Have a look at the Sherwood versus the Oberdorfer N202M-16, side by side here. Seems like they are as alike as apples and oranges, doesn’t it? 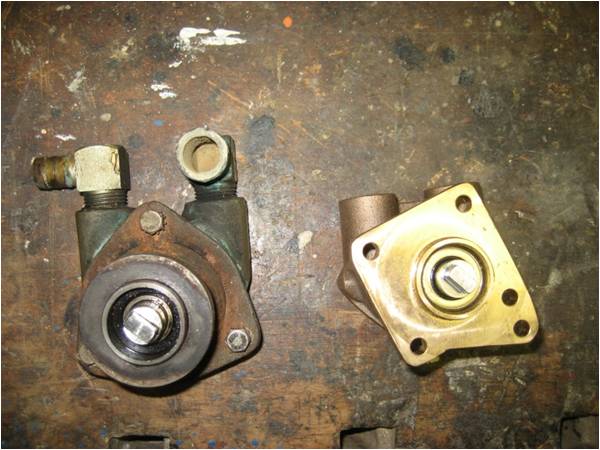 The M35B requires more extensive modifications to the Oberdorfer casting than the M35A does, plus another small mod to one of the 90 degree fittings that carry raw water to/from the pump. But these mods are readily do-able, and are well worth the savings in money and hassle. Let’s get the easy one out of the way first. Here’s the smallest of the mods that need to be done to accommodate the M35B. This is a slight clearance issue with the fittings. 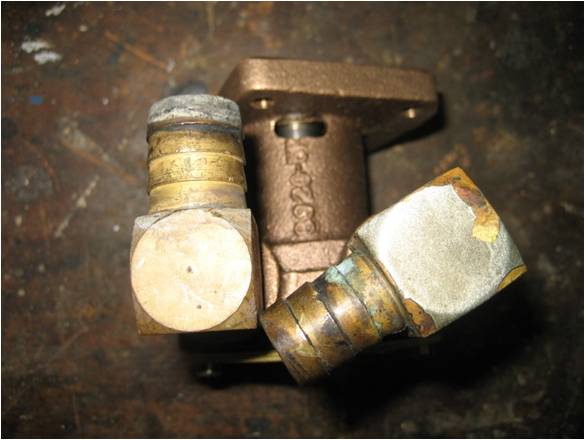 This is an easy problem to solve by simple grinding a small amount of material from the fitting, as shown here. 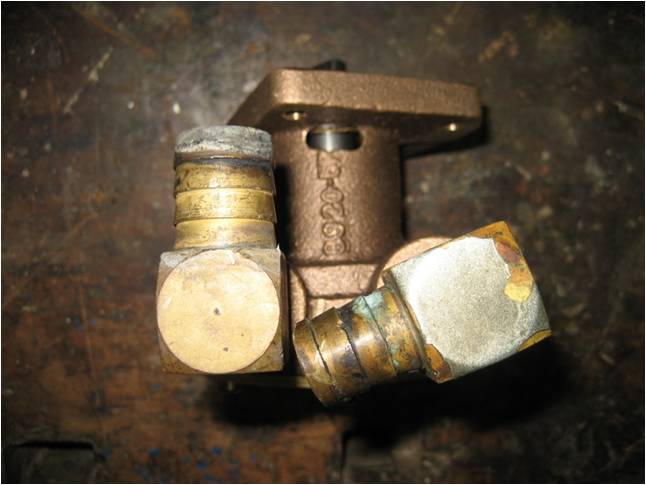 The Oberdorfer casting for the M35B, however, needs considerably more surgery than on the M35A. Nile used a Sawzall to cut the bronze casting away, and then ground the edges for smoothness. Not a job for the Dremel, that’s for sure. 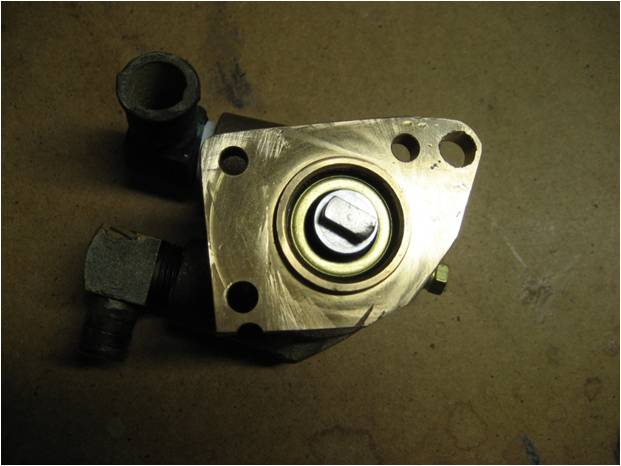 The paper profile shows the amount of material that needed to be excised. 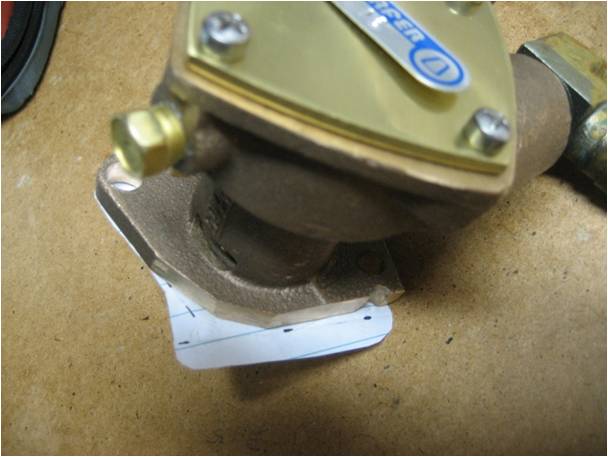 Nile says that there are two ways to find where to add the lower right mounting hole. 1) Get the appropriate cone point set screw (can find them on e-Bay). Grind two flats on the sides to get a wrench on it. Screw them into the screw holes in the engine with point sticking outward, slightly above the mounting surface. Mount the pump in place and tap it with a hammer to create a mark in the pump body to indicate where to drill the lower right hole. Or… 2) Place a piece of paper over the diamond shaped mounting land on the engine and make a rubbing of the outline and the holes. For the rubbing, says Nile, “I carefully cut out the center hole and placed it over the boss on the pump, and used that as a guide for the bolt holes. I also used it for making the gasket.” He states that he would have preferred using the first method, but was too impatient to wait for the cone point set screws in the mail. Here’s the modified Oberdorfer with self-made gasket ready for installation on the M35B. 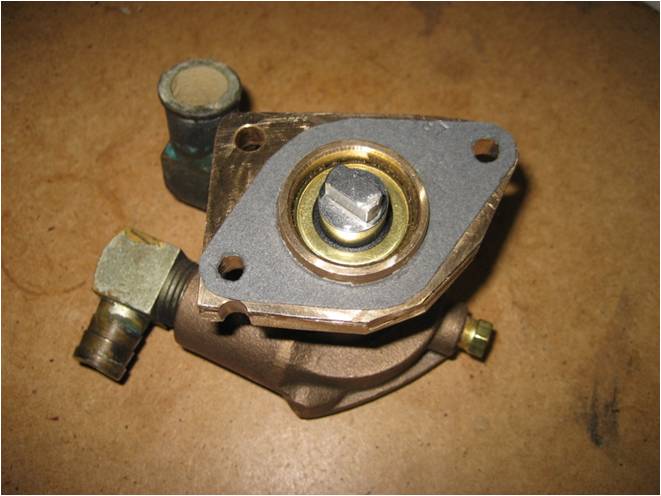 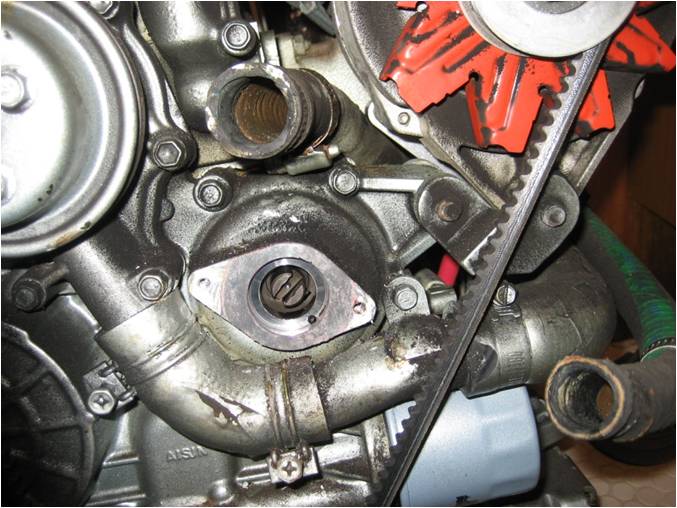 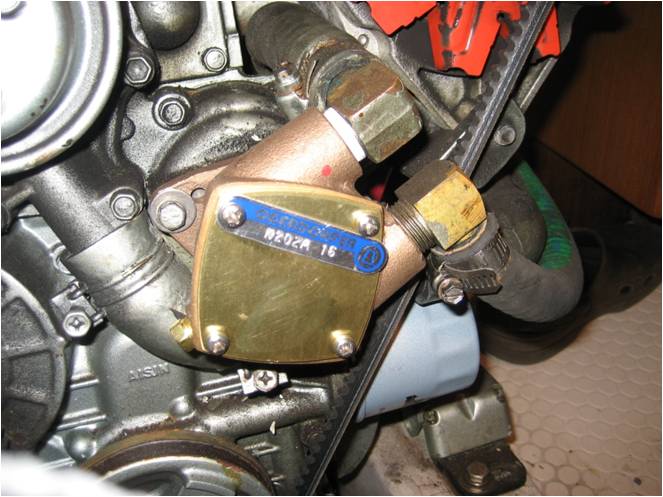 Nile says that the new pump has been running fine, with over 30 hours of runtime. The engine temperature has not changed from the previous pump. The new Oberdorfer N202M-16 pump is now installed on the M35B… 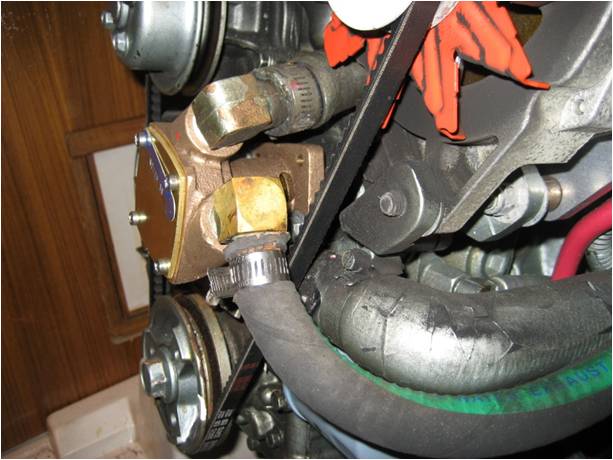 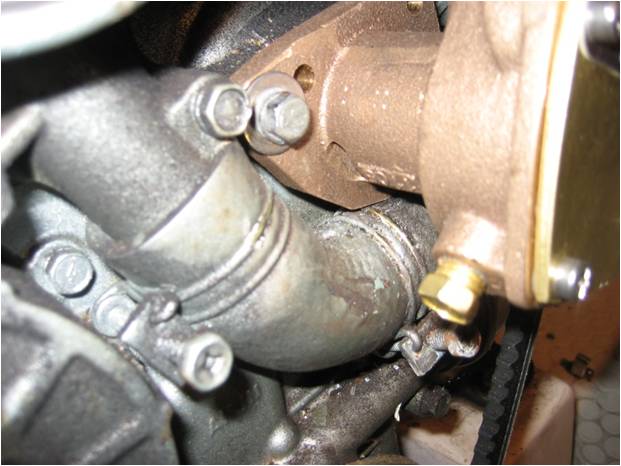