Difference between revisions of "Bow and Stern Navigation Light Replacement" 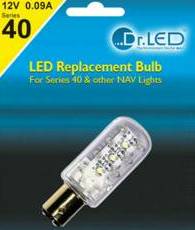